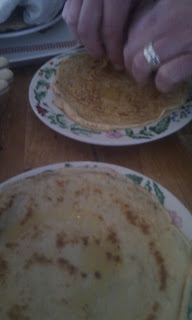 In our house we have a sourdough starter (or leaven). In fact we have two. Part of the whole process in keeping it 'alive' is that every so often you have to halve it, add more flour and water and get rid of the other half. Since we hate wasting anything we kept the last lot to make pancakes with.

I'm sure at some point OH will say more about sourdough bread and starers - he has many thoughts on this that I feel sure he's keen to share. The starter is like having another pet, it has to be looked after, fed and not left out in the cold.

So using 'Son of Sourdough' I knocked up some pancakes for our breakfast while OH made today's bread orders. I used a recipe from the Herbert Brothers from The Guardian. Frankly, neither I nor OH were fans of their recent Channel 4 show, and the whole post-Jamie Oliver, lads cooking stuff I could totally live without. However, sourdough pancake recipes were a bit thin on the Google search ground.

If you want to have a go the recipe is here http://www.guardian.co.uk/lifeandstyle/2012/feb/20/sourdough-pancake-recipe

It made a nice batter but to be honest I could do with a bit of detail. The only person I let off detail in a recipe is Nigel Slater. So I'll give you my tips. 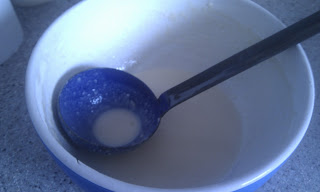 Once you've made up the batter as per the Herbert's instructions, the recipe could do with a suggested pan size, as you don't really have any idea how big or thick these babies should be. I used my trusted omelette pan and made them to the diameter of the pan. This meant using around two thirds of a ladle of batter (have included a picture of my ladle if that is at all handy!).

I added the batter to the pan and gave it a swirl around so it coated the base. 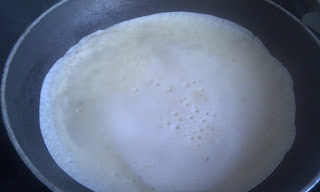 When I make pancakes of the usual variety (not with Son of Sourdough) I have a pan of simmering water on the go with a plate over it to keep the pancakes warm while I make the rest. Then I just stack the pancakes up and cover them over with a clean teatowel or some foil. Delia taught me this little tip in her Complete Cookery Course - see Herberts that's how you write a recipe, little things like that make all the difference!

I gave each pancake around 30 seconds (but keep an eye on them!) and turned them over (no flipping, I like a palette knife for this job). And give them a little less on the other side. 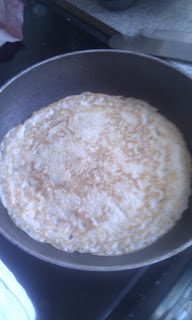 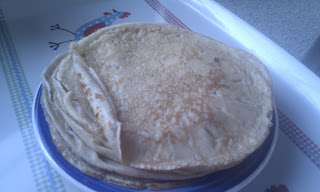 We had these with the choice of syrup (or as Project A called it when she was small Cyril) or honey. I liked honey as it's sweetness and floral flavour (get me!) works well against the slight sourness.

Apologies for the photography, it was really early!
Posted by Blackbird bread at 19:53