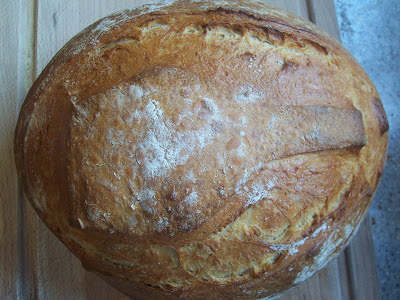 This is the latest addition to our stable! It's a beer bread, traditionally called barm bread, which contains a whole bottle of Ruby Red Ale. Hic! It has a distinctive taste, particularly when toasted, but works well alongside hearty winter dishes like casseroles and stews. Apparently the term barmy comes from the bread. You'll see why when you stir in the flour with the warm beer!

It takes approximately six hours to make, although most of that time is spent proving, with a 30 minute bake time. This is considerably shorter than the traditional version, but we do nod towards our ancestors by including some sourdough starter in the poolish (a starter for the bread). The recipe would have taken a lot longer to work out if not for Dan Lepard and Edesia's Kitchen and their own recipes for this type of bread which I have used throughout. Thanks!

The ale is very important to this bread and we tested three types. In the end we favoured St Peter's Ruby Red Ale. They're a small brewery based in Suffolk and we fell in love with their beer immediately. For those who live in London, they have a pub!  More details are on their website  By the way, check out their logo. Now which micro bakery does that remind me of? 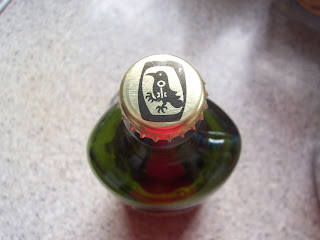 To make the poolish, pour 250ml of the ale into a saucepan and bring to near boiling point, then whisk in 50g of the bread flour. Leave until almost cool, then stir in the sourdough starter (if you don't have a sourdough starter, replace with a pinch of dried yeast).

The poolish is now made. Pour into a bowl, whisk again, cover tightly with clingfilm and leave for at least three hours. It should look like this, fermenting slowly, with a few bubbles but can also resemble wallpaper paste. Either way it's fine! 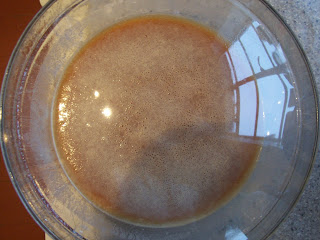 After at least three hours, pour the remaining beer into a saucepan and bring to just warm (nowhere near as hot as earlier), then combine with the poolish and all of the dried yeast.

Measure out the flour and salt into a mixing bowl and combine with the poolish mixture. Stir well, using a wooden spoon, add more bread flour if needed, until it is 'kneadable', then place upon a clean work surface.

Knead for ten minutes, shape into a round, place back into the bowl and cover with clingfilm. Leave for 45 minutes or until doubled in size. See our previous post for detailed instructions for kneading, knocking back and proving.

After 45 minutes, remove from the bowl, knock it back by prodding your fingertips all over the dough, fold into a round and place upon the work surface, (use more bread flour as needed). Cover with a tea towel and leave for 15 minutes. After this, remove the tea towel, knock it back again (yes, fingertips all over!), shape into a round, onto the floured work surface, cover with tea towel and leave for 45 minutes.

At this point, switch the oven on to 200C. You want it blasting hot! Put your baking stone, or pizza stone in the oven (or flour a roasting tray) plus a roasting tray on the bottom of the oven which you will fill with boiling water to help hydration.

Boil a kettle and fill a water spray if you have one.

After 45 minutes, either place the dough upon your roasting tray, or on a peel. It should look like this (ignore the fact I have two loaves here!) 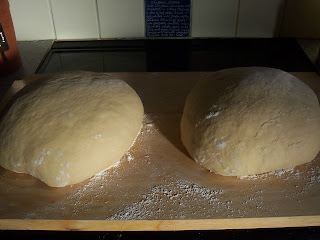 Carefully using a sharp breadknife, score/slash the dough. For this loaf, I cut a beer bottle shape! Start at the neck of the bottle and moving quickly, cut the shape of a bottle. You can do any slash you want of course (I won't pop around to check!), a simple diagonal slash will give you control of how the dough rises. 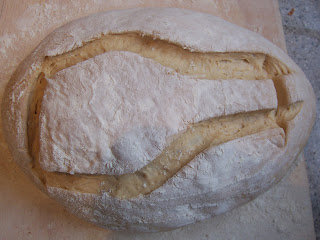 Spray well with the water spray and pop into the oven. Fill the roasting tray on the bottom of the oven with boiling water to create steam and close the oven door as quickly as possible!

Leave for 10 minutes at 200C, then turn down to 180C. (Keep an eye on your loaf. I turn my loaves by 180 degrees every 10 minutes to prevent any areas burning). After 20 minutes, give the loaf another spray of water and leave for another 5 minutes. After this, flip it over to bake the base of the loaf.

This has now baked for 30 minutes. Test it out by tapping the base of the loaf, it should sound hollow. If it doesn't, pop it back for a further 5 minutes. 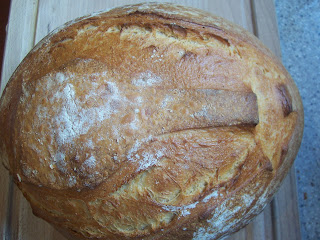