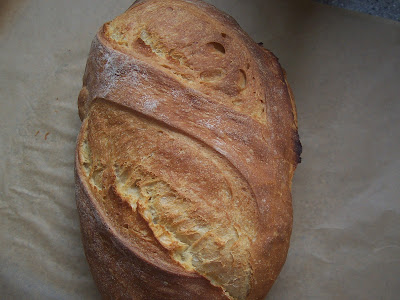 Slashing, or scoring, a loaf is the most exciting part of making bread for a lot of bakers. (We don't get out much). Okay, testing, shaping and trying new recipes is fantastic too, but the slash is sometimes everything!

It's commonly believed that people used to slash their loaves when bakers ovens were shared by a community, usually during the night or when the baker had finished using the oven and it was cooling down, which could take several hours. In order to recognise your own loaf, people would slash their initials, or a design that made it unique to them.

Of course, there are other reasons to slash your loaf. The dough, once placed inside a very hot oven will expand, so it is a good idea to control that growth. If you don't slash, then you increase the chance of unwanted cracks appearing in your loaf. It also increases the chances for the loaf to be cooked thoroughly.

The other reason, if you are making soda bread, is to let the fairies out. Don't mock.

You don't need expensive kit or special blades, just a sharp (and it does need to be very sharp) breadknife.

When I started to bake, the slash I used was a simple cross, which I still use every now and then. Just two quick strokes of the knife, approx one inch deep, and the effect is nice, particularly on a round wholemeal loaf.
Once you start to slash your bread, you can't stop I'm afraid! You'll attempt anything. Some designs work well and some are total disasters (and if you think I'm putting any wrong 'uns on this blog then think again!) My advice is keep it simple.

You can try simple slashes horizontally across the loaf...


...or both vertical and horizontal slashes....

...clock-like slashing on a round loaf... 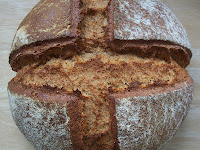 ...or really go for it and slash diagonally in both directions!

Practice helps considerably, as I will show!

We recently added a barm bread to our stable (check it out at http://blackbirdbread.blogspot.co.uk/2013/01/blackbird-barm.html

For this loaf I wanted to reflect the fact it contained a whole bottle of wonderful ale! So, for the first loaf I slashed a bottle of beer, which looked like this: 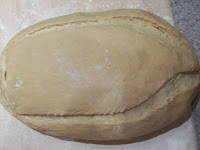 It was too big and, when baked stretched too wide and almost disappeared. So next time I made it smaller. 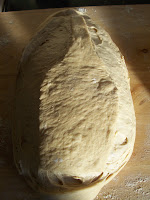 Better, but too feint when baked - the slash made little impression.

So, third time lucky. This time I made it smaller and bolder! 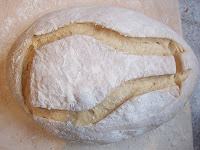 Now, that's more like it! And, when baked, it looked this this. 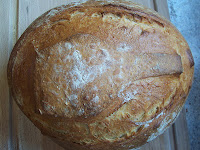 The image is clear, stands out from the rest of the loaf and, with an extra dusting of white flour, the bottle shape stands out more clearly.

One final thought before I slash some more dough. This is a before and after shot. How to get from here: 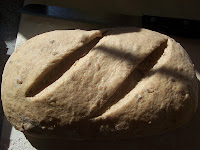 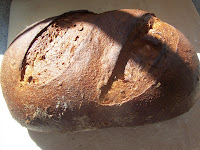 Slashing is the first step, obviously. Two careful horizontal slashes. But don't leave it there. Place your hands under the loaf and bring them together, stretching the dough into the most amazing shapes! This applies to almost all of the loaves I've featured on this post.

So, please give your loaf some extra identity - go on, give it a slash!
Posted by Blackbird bread at 13:54