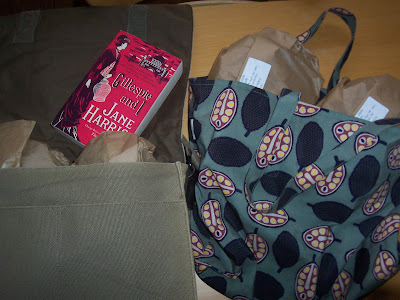 This post concerns the adventures of four loaves and the day they travelled into London. They were all destined for good homes and were well looked after. But, like all good tales, this story started several weeks earlier...

In January we introduced a new bread to our collection. A barm bread. http://blackbirdbread.blogspot.co.uk/2013/01/blackbird-barm.html We contacted St Peters Brewery as we used their Ruby Red Ale in the recipe. We agreed to make two barm loaves and bring them to their London pub, the Jerusalem Tavern. (See below for links).

As I don't get out much, I also agreed to meet up with my brother, with a free loaf as a bribe. (One loaf gone already!)

Finally, and the cause of much excitement in our nest, was the prospect of meeting
Jane Harris at the same time. Obviously you know who Jane Harris is. She has written, in the past few years, two of the most amazing novels - 'The Observations' and 'Gillespie & I'. They are both set in the 19th century, both are crammed full of suspense and are written by a master story teller.  But you know that don't you! Via Twitter, we had chatted with Jane and promised her a loaf! (That's two loaves).

So, we were killing three birds with one stone. (Don't be alarmed fellow blackbirds. It's just a saying). The loaves and I set off to meet three people at the Jerusalem Tavern. This involved a train into London plus adventures on London Underground! 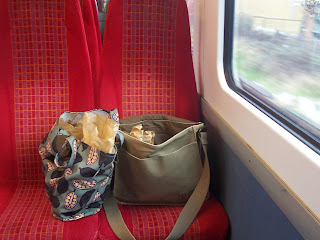 As the loaves had just come out of the oven, the train carriage reaked of freshly baked bread. In fact, I gave out several leaflets to fellow passengers. Yay!

Eventually we (the loaves and I) made it to the pub and we had a chat with Dave, the manager. He liked the bread and used it up the following day. Here's Dave plus loaf. The other chap is too astonished to even look up from the loaf. I can't blame him. We were even treated to a free pint! (Three and four loaves gone. Job done!) 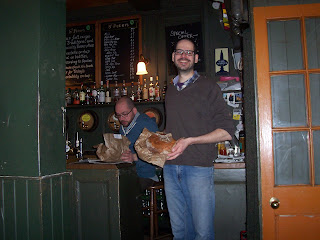 My brother was there by this point and within a short time Jane arrived too, followed shortly after by her husband, Tom. It was a really great evening, very warm and lots of laughter. Jane was gracious enough to sign my copy of 'Gillespie & I', to give us an extra copy (nabbed by my brother!) and a copy of 'The Observations', all signed. This is Jane and Tom - with my loaf! Thanks guys! 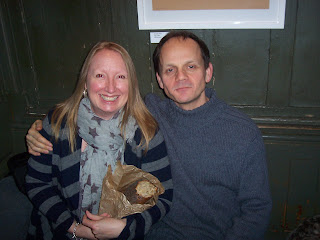 Great to meet everyone that night! Let's do it again!