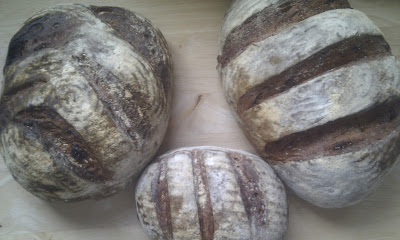 This post is dedicated to all those parents, aunts, uncles, grandparents....anyone in fact, who makes things for school projects. Now, we all know it's the kids who are meant to make it, but somehow we all end up getting involved. Such was the case with this!

Our eldest had been studying ancient Egypt (or t'Egypt for any Peter Kay fans out there) for what seemed like centuries. She visited the British Museum, had a dressing up day (cue lots of bed sheets and kitchen roll) and the inevitable finale - an Egyptian banquet.

We were asked to make some loaves for the kids to tuck into. After a little researching, we found out that common ingredients in loaves at that time were sourdough, dates and honey. So, we headed for the baking lab and got inventive!

The secret formula is better guarded than King Tut's golden bits, but we thought we'd share some pics! 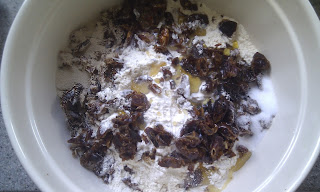 This requires a very lengthy knead - about 15 minutes, because there's a lot of information in that bowl! Then cover the bowl with clingfilm and leave for one hour. 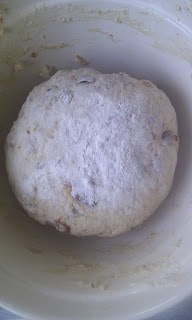 After one hour, when you have tried to get 'Walk Like An Egyptian' out of your head, take out your frustration on the dough by knocking it back, then shape into a ball. Repeat this process after 15 mins. The knocking back bit, I mean, not the singing!

The dough will now start to smell beautiful.Sweet aromas mixed with the tang that sourdough brings to the pyramid, sorry, I mean the table! 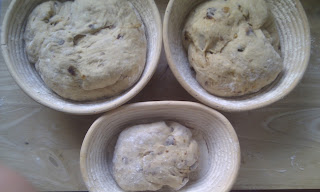 The dough was split into three parts, two large loaves and one small loaf and placed in proving baskets. This is a good idea with this dough. It's particularly sticky, so lots of flour is needed to dust the baskets.

Cover with a tea towel and leave to rise for one hour. Carefully remove from the proving basket, slash horizontally to try to replicate a mummy's face. See what I've done there?! 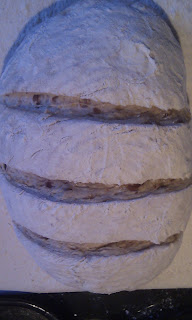 Spray with water, then into a red hot oven (200C) for 30 minutes, until you get this spooky lot looking at you! 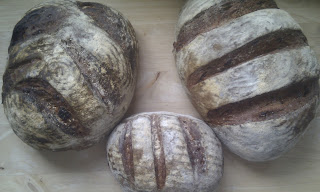 The loaf on the left is particularly good. The one on the right looks like he's telling a joke and the small one is just confused!

My daughter's contribution to the day? She named the loaf - Mummy's Curse! Love it!

Anyway, the kids ate them and even the headmaster took time to congratulate me! They taste like a grown ups fruit loaf and I hope we did the ancient Egyptians proud. Go on, do one for mummy!