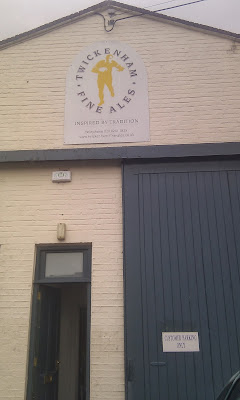 We were recently invited to take a tour around our local brewery, Twickenham Fine Ales. It was a family day out, cheaper than Legoland and nearer than the Science Museum, but just as informative (plus no queues!) I'm interested in developing recipes with a local brewery and this one just happens to be on our doorstep...

Firstly, I was so interested in looking at the enormous vats of beer, I must confess to not taking too much in. Luckily, they have their own website - http://www.twickenham-fine-ales.co.uk/ which will save a lot of duplication! In brief, they are an independent brewery which makes approximately a dozen types of beer (and I mean real beer folks) and sells them to lucky pubs within London.

We were shown around by Steve, the manager, who calmly watched as our children ran around making whooping noises (plus their father) and breathed in the all encompassing smell of brewers yeast. 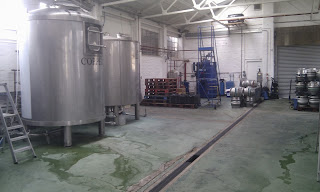 There are several vats in one large unit, all doing various things to each beer, depending on the season (beers are rotated). I was surprised at how quickly beer can be produced, within a few days plus, as a baker, was interested to learn the differences between brewers yeast and baking yeast, and, therefore, the similarities between making bread and making beer. 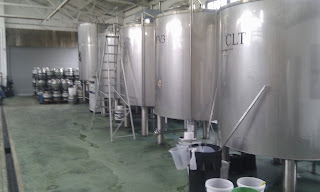 We walked through the first unit into a much colder storage unit. Now we're talking! Check out the barrels of beer on offer here! 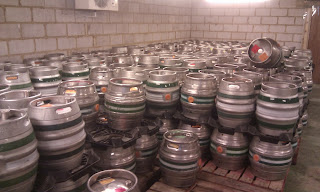 This was near to the loading bay and the temperature in that room was very cold indeed. It all want quiet as the kids were too cold to talk. Result!

I want to thank Steve for taking the time out to show us round. I don't think it's a regular thing he does, so I really appreciate it and look forward to using his beer in our bread as soon as possible! (Have you seen our barm bread folks?)
http://blackbirdbread.blogspot.co.uk/2013/01/blackbird-barm.html I know that others would also like to look around, so might be worth considering Steve?

Oh, and here's your empties back! 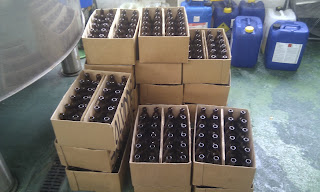 Posted by Blackbird bread at 13:37